In the 11th hour of the 11th day of the  11th month a ceasefire was declared between Germany and all allied forces fighting against them ( also known as WWI ). 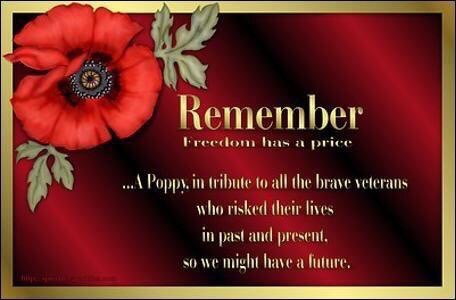 This day was one that impacted not one country or nation but an entire generation of people on earth. Armistice Day as it would be called for many years was declared a national holiday and has been considered as such since 1918. The name was changed to Veterans Day to honor all who serve around the world for their countries. The name change was necessary as the Great War (or WWI as it’s now called)  was not the last and only war.
What I find most interesting about this particular federal holiday is that it is on November 11th no matter the day of the week. The federal government tried to make this into one of its famous “Monday Holidays” but people refused to acknowledge the holiday on any other date other than the 11th day of the 11th month. President Ford signed a bill changing the day back to the 11th of November.

For generations that will forever have the day 09-11-01 as part of their memories we should be able to understand and recognize the significance of 11-11-1918 and how certain historical events should never be altered.

My own father served in the Army during the Korean War and my little brother was in the Navy during the struggles with Beruit in the early 1980’s. I admire the men and women who serve our country. Maybe my admiration comes from knowing a time when the draft was in force and if your birthday was pulled you served . This drafting of military wasn’t a choice you made but one that was made for you. I admire their sense of honor to our country. These individuals made a choice to serve knowing full well that any number of outcomes good or bad could befall them.